The 1915 Section Foreman House is being rehabbed by Construction Technology students from Cienega H.S. The project is funded and managed by the Vail Preservation Society. The historic railroad building was purchased, moved and placed in the center of Esmond Station K8 school while it was still under construction. The school opened in the fall of 2014. The school site includes a section of 1880s rail bed. VUSD and the new school’s Site Council recognized the unique opportunity this piece of history imbedded in the landscape provided. They understood that this piece of local history could enrich the educational experience of future students, provide a site relevant theme for the school, reintroduce local railroad history to Vail while providing specialized preservation trades training for Cienega H.S. Construction Tech students. In a community comprised mostly of new, identical stucco houses, where all railroad buildings from the area had been removed or demolished by 1970, this site and the building provide a tangible connection to Vail’s railroad roots that link our youth to their communities’ heritage.

Students from Cienega H.S. and Esmond Station K8 are learning historic preservation methods and lifelong skills as they make a lasting contribution to their community. Students are learning the traditional construction skills one would expect: installation of electrical systems, framing, plumbing, concrete steps and finish work, and HVACC installation. Students have also learned to restore wooden double hung sash windows, glaze glass and experience the challenges and decision making that are part of historic building rehabilitation. They are learning how to incorporate the modern systems into the 1915 building that will make it a functional part of the Esmond Station Campus while preserving as much of the original fabric of the building as possible.

Esmond Station K8 sixth through eighth grade students are involved in the project as well. They are included in the project planning and have made key decisions regarding fixtures, paint selection and some have learned to measure, plan and sew the curtains that will be used in the house. The building and the sense of place it brings to the campus also brings opportunity to engage students in collecting related oral histories, to build scale models and think about possible uses for this and other historic buildings. And, more broadly, how historic preservation can be incorporated into Vail’s future in functional and relevant ways. Preservation Youth Projects connect community, provide ways for youth to contribute in real and meaningful ways, learn lifelong skills and inspire the future.

The 1915 Section Foreman House and its Story

Originally located about eight miles east of Vail at the El Paso and Southwestern Railroad (EP & SW) stop called Marsh Station. The tiny railroad community of Marsh Station is only a memory. It was one of the many railroad service points constructed along the EP & SW main line about every six to nine miles as they extended their rail system to connect to coast to coast markets.The house was constructed in 1915 to EP & SW standard plans. It was located about 20’ from the tracks.

As we research the history of the house which has moved three times since 1915 we have met the Haro family who lived in the house between 1927 and 1954. Students who work on the house and from Esmond Station K8 have had the opportunity to meet Willie Haro and his wife Lucy, and to ask Willie questions about what it was like to be one of the 14 siblings to grow up in the house and be part of a railroad family.

The EP & SW sold out to the Southern Pacific Railroad (SPRR) in 1924. It has always been painted the bright Armor yellow. That color became a railroad standard for safety reasons. In the early days of railroads before electricity a color that would show up at night was necessary. Armor yellow was a perfect choice. Trim was either brown, maroon or green, often depending upon what the Station Master was able to procure. The 1915 Marsh Station Section Foreman House has had all of those trim colors over its lifetime. Many old timers recall it having green trim and a green roof. When the original cedar shingles were replaced we discovered traces of green paint on them. This had most likely been painted on as a preservative. This led to the decision to take the house trim color back to green. At the time of the house’s purchase it had brown trim, but during the remediation process traces of maroon and green were also found.

As railroads modernized and maintenance and safety systems became for streamlined and mechanized the need for as many workers and the number of service points lessened. That is what happened to Marsh Station. By the 1960s it was no longer needed. Buildings were moved and repurposed by the SPRR, sold or demolished. The Section Foreman House was purchased by John Dewey and moved to Rita Station near the current IBM location just northeast of I10 and Rita Road. The house crossed the 1921 Marsh Station bridge during its move, just clearing the concrete railings by about 4”. According to Mr. Dewey a passenger train stopped to watch the building move slowly over the bridge.

Mr. Dewey had purchased several railroad buildings and the water tower from the Wilmot Station. His family lived in one of the houses, others were used as rentals or storage at the Rita Station site. In 1970 when IBM decided to expand they wanted to purchase the property where Mr. Dewey had placed the houses and water tower. After negotiations an agreement was reached and the houses and water tower were moved a second time to Ross Acres located near the intersection of I10 and Kolb Roads.

The houses remain there except for the Marsh Station Section Foreman House that was purchased and moved by VPS in 2014. This is its third move. Mr. Dewey who heard about the move came by to see it on a visit to Tucson in 2015. He is very happy about this new chapter in the life of the 1915 building. We expect that the building will continue to enrich the lives of Esmond Station K8 students and their families for the life of the school. 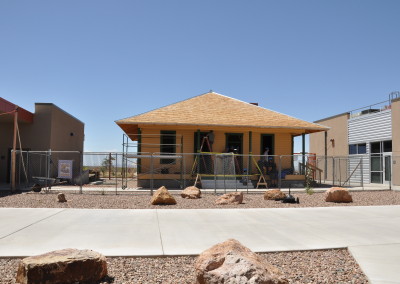 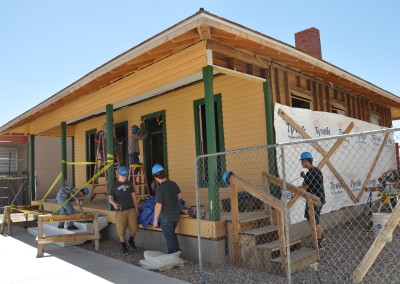 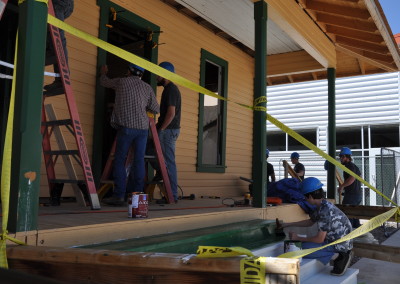 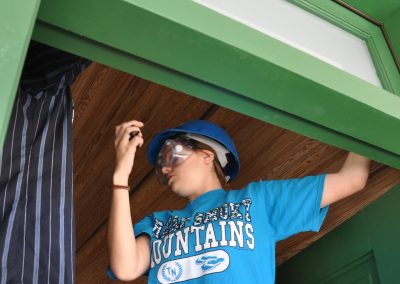